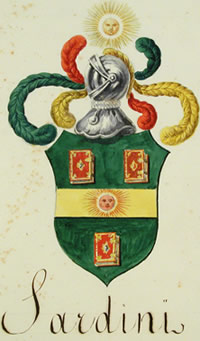 Coat of Arms of Sardini

The Sardini were an important noble family of the city of Lucca from the Middle Ages until the conquest of Lucca by the French in 1799, and were one of the chief representatives to the executive power of the independent Republic of Lucca.

The first to settle in Lucca was Dino Sardini in 14th century, coming from the nearby Pieve San Paolo. Beyond the military career, his many descendants in Lucca were dominant in all fields: political, diplomatic, financial and industrial. There was even a bishop.

The two most illustrious representatives of the family Sardini were definitely Scipione in the 16 th century in France and Giovan Battista Dominico in the 18 st century in Lucca.